Reflections on Obama from Japan

Yah for Obama!  I’m no longer ashamed to be an American in a foreign country.

Over the past few days, I’ve been making an effort to get out of the house and see and experience the culture of Kutchan and Niseko Japan.  I have been trying to meet and interact with the locals here, whether they are restaurant owners, skiers, snowboarders, diners and drinkers, practicing my Japanese as much as possible.

The people I’ve talked to are educated about American politics and excited about our new leader.

This photo was taken at a local bar, the Loaf Lounge, in Kutchan, Hokkaido, Japan: 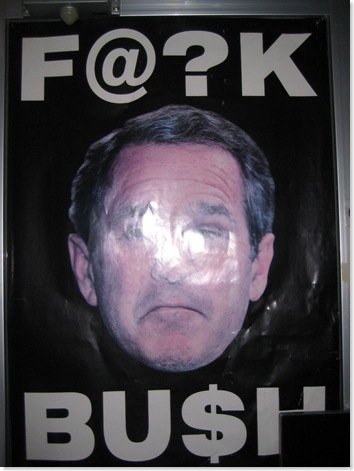 I applaud Obama’s executive order to close Guantanamo Bay and show the world that the United States can respect human rights and uphold the basis of our constitution, the writ of habeas corpus.

I further applaud his pledge to uphold the Supreme Court’s decision in Roe v. Wade and to reverse the ruling on U.S. Abortion Aid.  Why does it seem like certain groups care so much about life from conception to birth but then ignore human rights after that?

“For too long,” he said, “international family planning assistance has been used as a political wedge issue, the subject of a back-and-forth debate that has served only to divide us. I have no desire to continue this stale and fruitless debate.”

I have been watching international television and I feel a new hope for our country from abroad.  I left during a dark era of United States history, and will return back to a brighter present and future.